SHOP NEW WINTER APPAREL UP TO 60% OFF

There are two scenarios to how you stumbled on this snowboarding information page for kids. You’re either a) a snowboarding family or a skiing family yourself and you can’t wait for your child to join you and share in your fun on the slopes. Or, b) your child expressed an interest in learning how to snowboard and you’re doing your due diligence to find out all you can about the best kids’ snowboards, what size snowboards for kids are appropriate and what resources are available to help teach your child how to snowboard.

We get it — snowboarding is a much more gear-intensive sport than, say, karate or jujitsu. You also want to make sure that your kid’s desire to learn how to snowboard isn’t as fleeting as his or her foray into modern dance, fencing or hockey. We’ve put together some information about snowboarding for kids that will familiarize you with the best kids’ snowboard options and other info that will allow you to enter the wide, wonderful world of snowboarding well-informed.

Be Real, But Make it Fun

You know those memes that depict expectations versus the reality? This can 100% be applied to teaching children how to snowboard. No matter how excited little Johnny or Janey is about learning how to snowboard, the reality is that it is going to be hard work — at least harder than what they’ve built it up to be in their minds. It’s not all going to be rainbows and they are sure as heck not going to be shredding like Shaun White on their first runs. Kids, like the weather, are unpredictable. There may be tears, then again — there may not be. That’s the thing. Go into snowboarding with an open mind, especially when it involves kids, who we all know (from experience) can go from zero to nuclear in a millisecond. There’s no reason to be a Debbie-downer, though. Make it fun: Include a promise for a fun incentive. Hot chocolate is always a good idea. Let them pick out their own gear so they feel good about their outerwear choices, hats and gloves.

What Age is Right to Start Snowboarding?

There’s a huge debate on whether or not kids should learn how to ski before they learn to snowboard, and that’s just not something we’re going to engage in. There are valid points on both sides. However, some snowboarding families insist that as long as a child can walk, they can be strapped to a snowboard. They’ve certainly got the squatting position down by that age, which is a tough one for adults pull off.

What Gear Do Kids Need to Snowboard?

Finding the best kids’ snowboards is probably the biggest hurdle to clear. We’ve put together a simple kids’ snowboarding chart to help guide you in finding the best kids snowboard for your child. This particular chart uses averages, which are the 50th percentile of height and weight. An ideal board should reach their chest, tail to tip. We know, we know — every child is a snowflake, so we recognize that yours may be different; this chart is just an estimation.

If your child is between two heights, find their weight. If they are lighter, go for the shorter end of the kids snowboard length range. Heavier for the height? Opt for a longer side of the range. If your child rides aggressively or fast, a longer board that’s closer to their nose is best. Because kids grow so fast, we completely understand the temptation to purchase a longer board; however, it’s important to stay within the recommended range. If you’re too far outside that range, it can actually hurt their skills. It also won’t be much fun for them.

A snowboarding helmet is a given; they will fall down. There’s also a pretty good chance that they may run into something or someone. A helmet has to fit well; many of the kids’ snowboarding helmets have an inner helmet that can be expanded for a better fit.

Choose well-fitting boots that have buckles that adjust so they’re snug, but not too tight. Kids’ bindings are adjustable, so they’ll fit several shoe sizes. The bindings MUST fit the boot. 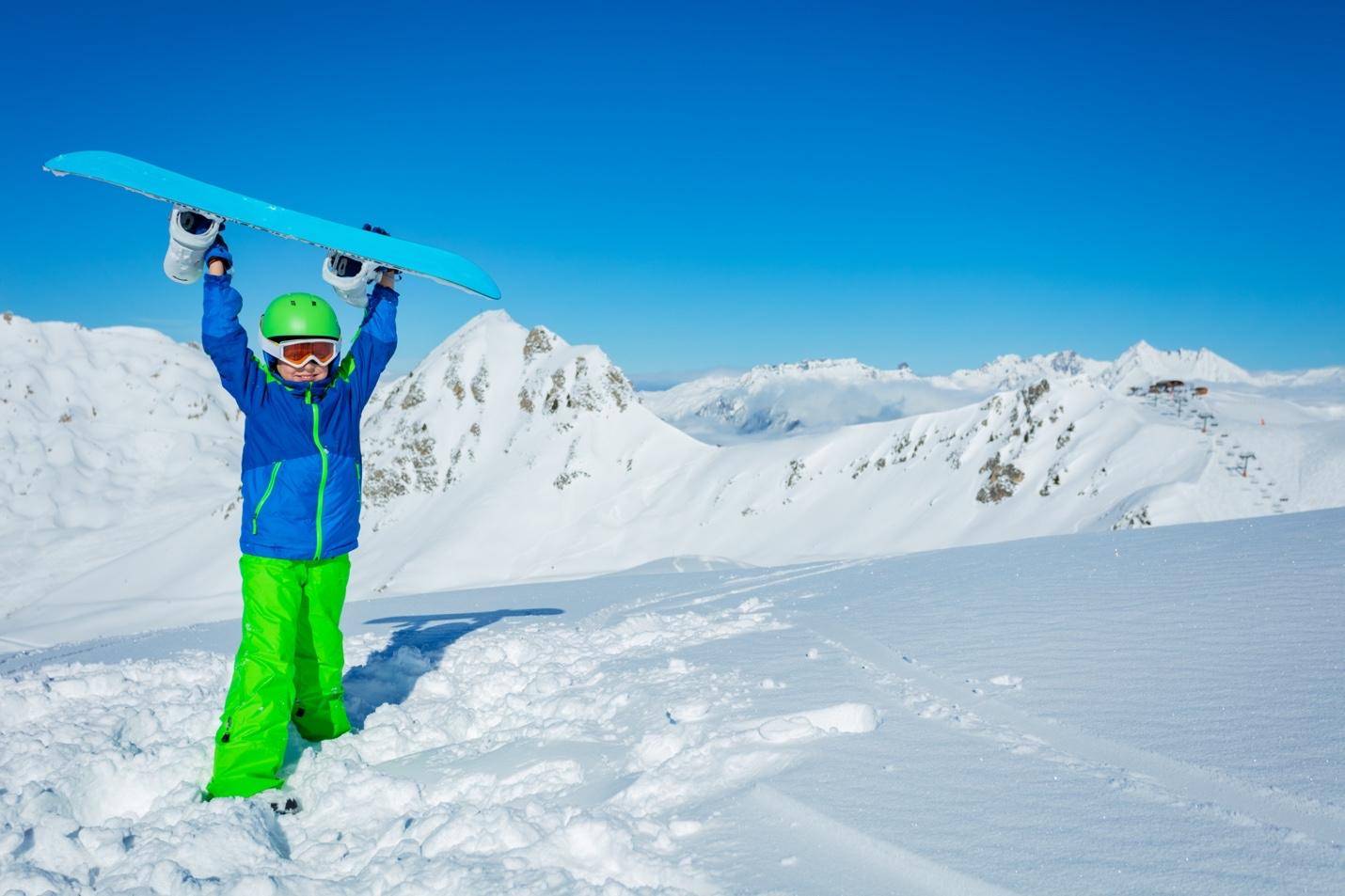 Falling down is the nature of snowboarding, especially when just starting out. Many gloves come with wrist guards attached; you can also buy these separately. A best practice in snowboarding is to ball the fists when falling, not hold them out to try to “catch” themselves. A good reminder saying is, “Make a fist, save a wrist.”

When first starting out, it’s a great thing for kids to take a class — particularly a class that’s just for kids. They’ll meet new people, learn the language (snowboarding has its own lingo and jargon) and learn important safety information.

If you have any questions about choosing the right size snowboard for kids, gear or any other information, don’t hesitate to contact us. We’re available by phone, chat or email. You can also stop into one of our retail stores in Utah — if you’re in the area. We’ll be happy to help you find the best kids snowboards and gear.

×
Expert Advice
We love talking to our customers and sharing our gear knowledge. Our Customer Service team is based in Utah and knows our products inside and out. We're here to answer any questions and match you up to the right gear and the latest deals.
Chat Call Email
Stay In the loop
Recieve updates on the latest deals & promotions:
- Price Drops
- Secret Stash Updates
- Locals Only Deals

You may unsubscribe at any time

Clear all
No filter applied